The International Maritime Organisation (IMO) - the United Nations agency which is responsible for the security of shipping - introduced World Maritime Day to draw attention to the importance of maritime security and the marine environment.
Today, Guinness World Records highlights some landmark marine records, as well as a few more unusual seafaring record-breakers, from the busiest trade route to the most valuable shipwreck...
1. Busiest ocean trade route
According to the World Shipping Council, the world’s busiest trade route operates between Asia and North America. During 2012, a total of 7,529 million cargo containers were transported from North America to Asia, and a total of 14,421 million containers were shipped in the opposite direction – giving a total figure transported of 21,950 million. The second busiest trade route was Asia-North Europe, with 13,365 containers passing between the two regions.
2. Deepest test basin
The world's deepest marine test basin is 35 m (114.8 ft) deep, and can be found at the National Maritime Research Institute in Tokyo, Japan.  The facility is designed to simulate a deep-ocean environment for the testing of scale models of oil drilling platforms and other facilities which are connected to the ocean floor. The basin has the ability to simulate waves and undersea currents.
3. Most valuable shipwreck
Mel Fisher (USA, 1922-1998), one of the most famous 20th-century treasure-hunters, found the ship Nuestra Señora de Atocha off the Key West coast in Florida, USA, on 20 July 1985. The ship carried 40 tonnes (43,742 kg) of gold and silver and some 31.75 kg (70 lb) of emeralds when it went down in a hurricane in September 1622 with 265 people on board of which only five survived. 4. Largest naval exercise
The Rim of the Pacific Exercise is an annual international maritime exercise which was first held in 1971. Its main participants are the USA, Canada and Australia, with the UK, Chile, Peru, Japan and South Korea participating regularly.
6. Ship with the largest lifting capacity
The MV Fairplayer and MV Javelin, operated by Jumbo Shipping of Rotterdam in the Netherlands, are J-class mega-ships equipped with two Huisman mast cranes each capable of carrying a load of 900 tonnes (992 tons), giving a maximum lifting capacity of 1,800 tonnes (1,984 tons). Each cargo ship has a maximum transport capacity (deadweight tonnage or DWT) of 12,673 tonnes (13,969 tons).
5. Heaviest ship pulled by teeth
Omar Hanapiev (Russia) pulled the 576 tonne (1,269,861 lb) tanker  a distance of 15 m (49 ft 2.4 in) using a rope connected only to his teeth, on 9 November 2001 at Makhachkala, Russia. 9. Longest maritime boundary
The longest maritime boundary is that between the Danish dependent territory of Greenland and Canada at 2,697 km 1,676 miles.
10. Largest amphibious aircraft
The Russian Beriev A-40 'Albatross' aircraft, which is capable of taking off and landing on both land and water, has a maximum take-off weight of 86 tonnes (189,600 lb), a wingspan of 42.5 m (139 ft) and is 45.7 m (150 ft) long. It is powered by two turbojet engines with 15,000 kg (33,069 lb) of thrust each. The multi-purpose aircraft can be used for search and rescue, cargo and passenger transport, maritime patrol and military applications. 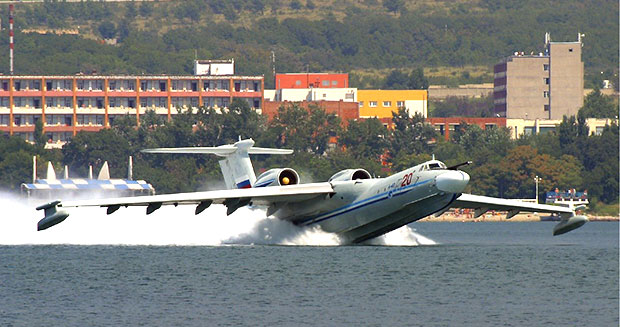