From the Archives - Deadly Piranha!

From the Archives is a new feature here on guinnessworldrecords.com, in which we'll be showing off some of the many weird and wonderful record-breaking items we have here at Guinness World Records HQ - take a look!

This week's item brought out from the Guinness World Records archive is a preserved Amazonian piranha!

Piranhas, especially those of the genera Serrasalmus and Pygocentrus, are the most ferocious freshwater fish, and are found in the large rivers of South America.

Check this little guy (measuring around 15cm (6 inches) in length) out: 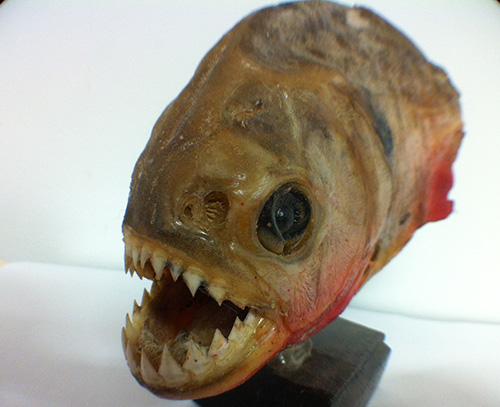 Did you know? - On 19 Sep 1981 more than 300 people were reportedly killed and eaten by ravenous piranhas when an overloaded passenger boat capsized and sank as it was docking at the Brazilian port of Obidos.

However, it is said that piranhas will not attack a human (or other animal) that is not already in trouble - they are attracted to the frantic splashing and blood of animals in distress.

So, dare you take an even closer look at those razor-sharp teeth? 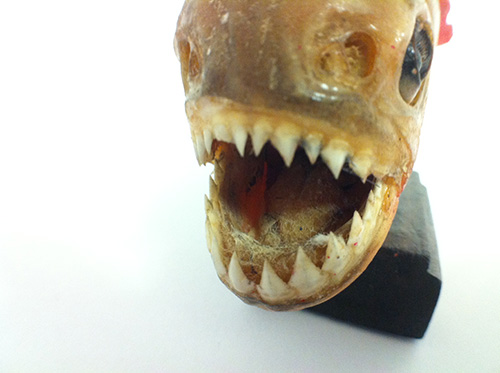 AHHH! That was a little too close for comfort!

As you may have guessed from seeing those fearsome fangs in such detail, a school of piranhas can completely strip an animal as large as a horse of its flesh within minutes, leaving behind just a skeleton - as we can see in this video from BBC Worldwide, in which some piranhas do just that to a duck in mere minutes:

Piranha attacks are swift and comprehensive as they start eating their victim alive – piranhas will even injure one another in the frenzy of an attack.

Which is all the more reason to be careful if you ever find yourself in the Amazon river - especially if you have an injury of any kind!

Until next time, safe swimming...