Every October since 1991, the city of Keene, New Hampshire, USA, has held its Keene Pumpkin Festival.

And five of those times, the ambitious town broke the Guinness World Records title for largest display of lit jack-o'-lanterns, in 1996-98, 2000, and 2004. But since that festival nine years ago, Keene had seen its crown taken by another group, going nearly 10 years without its trademark title.

Earlier this week, 30,581 pumpkins were carved, lit, and arranged, resulting in the largest display of lit jack-o'-lanterns going back to Keene and the organizing group Let it Shine.

The main display area was the tower in the town's Central Square, featured in the photo above. But jack-o'-lanterns lined the town's Main Street, as shelves and towers brought the sight of orange from every direction. Certainly ones to add creativity to their world record attempt, carvers enlisted designs of all kinds, including messages for the city, mustached pumpkins, and a full chess set with each piece represented by a different pumpkin.

Even the famous Angry Birds were present in the record-breaking tally. 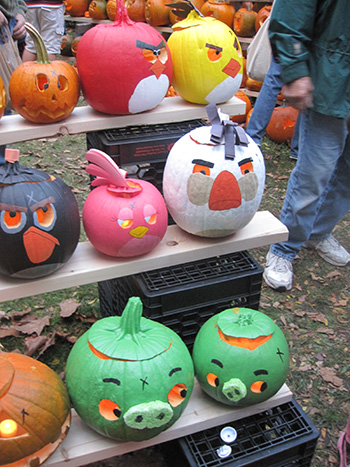 Tens of thousands of New Englanders descend upon Keene for the festival each year, and town officials estimate the city's population more than quadruples during the annual festival.

This year's record tally more than doubles the very first time Keene set this record originally, at 13,044 lit jack-o'-lanterns in 1996.