An impressive display of pumpkin carving on Monday saw children from Calgary in Canada make their way into the record books in time for Halloween.

Organised by supermarket chain Save-On-Foods, the attempt saw 1,301 jack-o-lanterns created and lined up in row to set a new record for longest line of carved pumpkins.

The pumpkins were carved by schoolchildren from elementary schools, hockey teams and Girl Guides throughout the Calgary region, before being stored in refrigerated trailers.

The jack-o-lanterns were then assembled over the course of several hours into a single line at the Calgary Corn Maze farm by Save-On-Food employees on Monday.

As this was a new Guinness World Records category, a target of 1,000 pumpkins was needed for a record to be set, with each pumpkin requiring a pair of carved eyes, eyebrows, a nose and mouth. They then needed to be in arranged in a single line touching each other.

“They really far exceeded the minimum and blew it out of the water,” said Guinness World Record adjudicator Michael Empric. 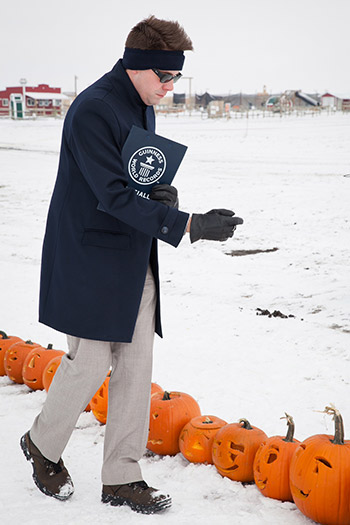 “Guinness World Records is all about what’s current, what’s relevant, and with Halloween right around the corner, it was really exciting to come out and celebrate the holiday.”

The display, which measures almost 300 metres in length, was the brainchild of Save-On-Foods staff who were looking for a unique way to drum up some community involvement with the launch of their chain in the Calgary area.

“It’s hard to describe until you actually see it, but it’s very impressive,” said Tony Piwek, general manager of Save-On-Foods Alberta following completion of the line.

“It was a huge thing when you looked at logistically laying it all out.”