For more than 20 years, the Turtles have thrilled viewers with a blend of action and comedy, and now Nickelodeon is relaunching the franchise with a brand-new animated series.

As part of the festivities, the Nickelodeon Universe theme park unveiled the new Shell Shock ride and invited hundreds of fans to set a new Guinness World Records achievement for largest gathering of people dressed as Ninja Turtles.

The previous record stood at 786 people at Rutgers University in New Jersey, USA, meaning a massive group would be needed for certification as "heroes in a half shell." 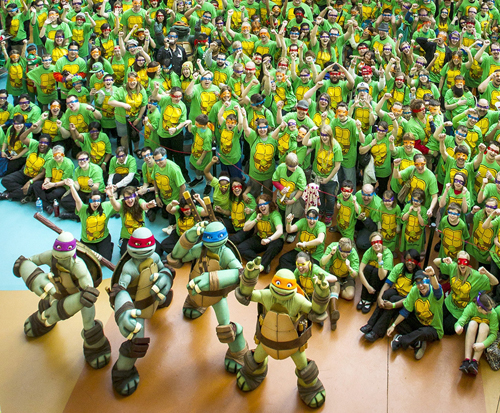 While all participants received a green TMNT t-shirt and coloured mask, many attendees brought their own home-made costumes matching their favourite of the four brothers.

In addition to the passionate fans who drove overnight for a spot in line, a troop of Girl Scouts and a contingent of mall walking seniors made the trek to the Mall of America for a chance to set a new record.

With everyone gathered, the official 10 minute countdown began, and the crowd danced along with Leonardo, Michelangelo, Donatello and Raphael.

After a final tally of the numbers and with a huge "cowabunga," I was happy to announce that with a total of 836 people, a new Guinness World Record achievement was set for Most People Dressed as Ninja Turtles.