It's that spooky time of the year again, and pumpkins are everywhere for Halloween! Here are 7 of our favorite pumpkin-related records:

7.Most lit jack-o'-lanterns displayed
The record for the most lit Jack-o'-lanterns on display (above) is 30,128 in an event organised by Camp Sunshine at the Life is good Pumpkin Festival in Boston, Massachusetts, USA, on 21 October 2006. 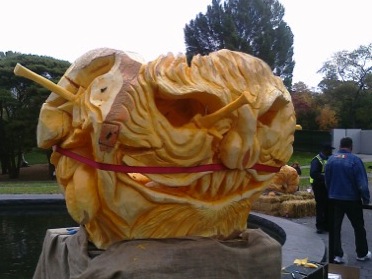 1.Largest pumpkin pie
The largest pumpkin pie weighs 1,678 kg (3,699 lb) and was made by New Bremen Giant Pumpkin Growers (USA) at New Bremen Pumpkinfest in New Bremen, Ohio, USA, on 25 September 2010. The diameter of the pie was 6 m (20 ft). The crust was made of 440 sheets of dough and the other ingredients were canned pumpkin, evaporated milk, eggs, sugar, salt, cinnamon and pumpkin spice.