Most candles on a cake 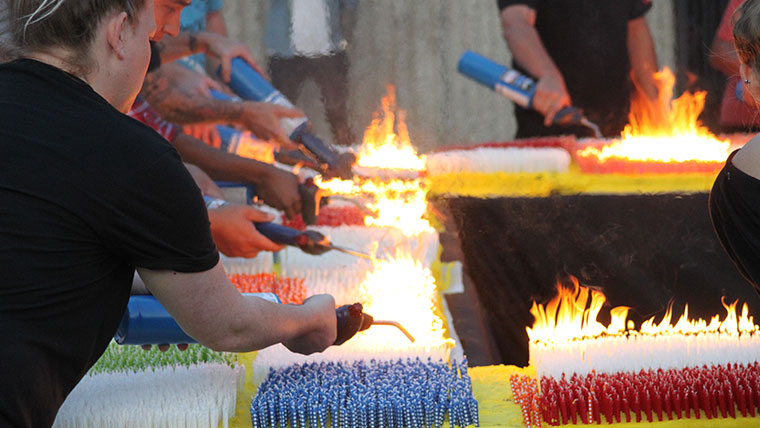 Facebook Engagement:
Over 50,000 likes in the post announcing the campaign and 580,000 views for the brand activation video
Online Coverage:
Adweek.com, BizBash.com, RollingStone.com or UsWeekly.com

How does a 17 year-old brand celebrate its birthday? With over 3,000 times the candles.

Mike’s Hard Lemonade, the unconventional alcohol brand known for its flavoured malt beverages, had two objectives upon partnering with Guinness World Records — celebrate its 17th year as a brand and ignite its target audience of millennials with a celebration that would spread like wildfire. And that’s just what they did. Mike’s invitation to celebrate its 17th birthday sparked an incredible blaze of viral content.

The Record: Produced by BeCore Marketing Experiential Agency, Mike’s birthday celebration video featured a whopping 51,000 lit candles across 72 sheet cakes. A Guinness World Records adjudicator was on-site to officially count and declare Mike’s Hard Lemonade the record holder for the Most candles on a cake.

Event Promotion: Two weeks prior to its celebration, Mike’s leveraged the Guinness World Records attempt to enlist Facebook fans to participate: for every “like,” the brand pledged to add another candle to its cake. Over 50,151 responses later, Mike’s fired up the blowtorch to deliver on its promise in a viral video exhibition of its record-breaking feat.

Post Attempt Engagement: The video capturing the celebratory blaze took the masses by storm. Mike’s Facebook page saw over half a million views while footage was also distributed via branded providers to major news and entertainment sites nationwide, including Rolling Stone and Us Weekly.