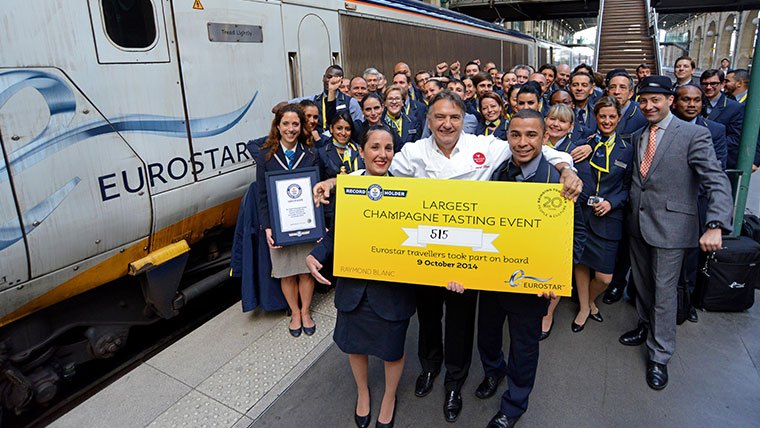 Eurostar, the high-speed passenger rail service linking the UK with mainland Europe, came to Guinness World Records for ideas to kick-start their 20th anniversary celebrations. Eurostar needed the campaign to both highlight the work of Raymond Blanc OBE, one of the UK’s most respected chefs, in transforming the on-board dining experience for Eurostar’s business premiere passengers, as well as engage passengers of their service to be part of the record attempt.

What better way to celebrate Eurostar’s 20th anniversary than with champagne? After a brainstorming session with the Guinness World Records creative team, Eurostar chose to attempt the record title for the Largest champagne tasting event.

Passengers on the 10:25 service from London St Pancras to Paris were welcomed on board with a special announcement from Raymond Blanc himself, who hosted the tasting. As per the record guidelines, travellers were served with three types of Champagne to sip one by one guided by leading wine expert and sommelier Arnaud Goubet.

Shortly after the tasting finished, the official Guinness World Records judge raised her glass to announce to passengers that a new record title had been set for the Largest champagne tasting event, with 515 passengers taking part. Eurostar utilised licensing of the Official Attempt logo for one month prior the event to invite passengers to get involved on the day and to build a sense of excitement and anticipation. Following the achievement, the Record Holder logo was used on Eurostar’s online channels to maximise awareness of their new record holder status and to promote the anniversary celebrations through their own channels for a month after the event.

I’m honoured to have been on board this special service to celebrate Eurostar’s 20th Anniversary and set a new Guinness World Records title for the Largest Champagne Tasting Event! The Champagnes were carefully selected and I hope everyone will join me in raising their glass to mark this momentous occasion.