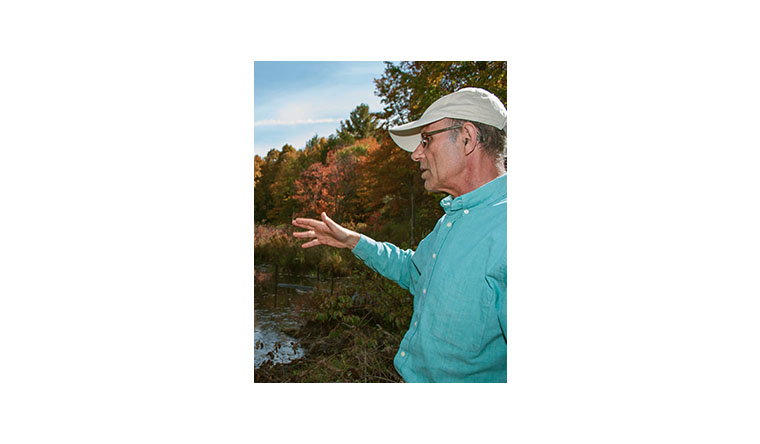 Dr Clive G Jones is an Emeritus Senior Scientist at the Cary Institute of Ecosystem Studies in Millbrook, New York. A research ecologist, he has studied how species affect the physical environment - ecosystem engineering - including how they create habitats and affect biodiversity. Recognized as the founder of this now large and rapidly growing field of basic and applied research, he is the author of over 200 publications, including six books. An elected fellow of the American Association for the Advancement of Science, his other awards and honours include a Guggenheim Fellowship, a Blaise Pascal International Research Chair and a Royal Netherlands Academy of Arts and Sciences Visiting Professorship. He is a member of the Board of This is My Earth and a founder of the Ecological Engineering Applications Group in France. He has served on numerous national and international advisory boards and panels.

The two-horned, trumpet-shaped burrow built by the European mole cricket (Gryllotalpa vinae), found throughout Eurasia, serves as a stereo speaker to attract mates. The male stridulates – calls to females – by positioning himself with his head in the bulb and his tail near the fork of the two horns. He stridulates by striking the rear edge of the left forewing, which acts as a plectrum, against the lower surface of the right forewing, which has a ratchet-like series of asymmetric teeth. This generates 3.5 milliwatts of mechanical power which is then amplified by the burrow, creating a sound of up to 115 dB (a sound-level equivalent to a lawnmower) at the mouth of the burrow that can be heard as far as 600 m (1,970 ft) away; even at 50 cm (1 ft 7.5 in) away, the sound pressure level has been logged at 96 dB (Bennet-Clark, 1970). A night-flying G. vineae female should be able to detect the male's song at a range of 30 m (100 ft), which is six times farther away than a typical Gryllus cricket that does not construct a burrow.